If you are familiar in any way with the Pupa brand, you might remember the classic beauty kits such as Pupart and Pupacat. This brand was one of the first to make it to the Maltese shores, at a time when make-up products were not that abundant and there was not much choice in the way of quality make-up. As important occasions rolled by, such as birthdays and Christmases, it became customary among many make-up enthusiasts to gift one of the luxurious kits – what a present that was for many! At that time, such a gift meant that make-up was set to last you for years. As the markets grew and so did the amount of brands vying for attention, people became more restless and wanted the latest fads. Just like fashion, make-up products nowadays tend towards the here and now, and often the marketing is created in such a way to make you really want the product, no matter what.

So when I attended the launch of Pupa’s new summer collection, I did not really know what to expect. All I knew was that some products were being launched. As the crowd was treated to some delicious nibbles and sangria at a relaxing beach location before the presentation, I had a look at the single items on display. As I spoke to the affable and down-to-earth representative Stephanie, who is in charge of the company’s business development, it became clear that Pupa has had to move ahead with the times, offering products that would satisfy that restlessness I mentioned earlier, while diversifying from the kits it has become known for. As a number of people swatched the products, I noticed how their attention was drawn to certain items in the Bronze Fever collection, and mine was too. Particularly towards the Vamp! Intense Kajal eyeliner, shaped like a crayon, and the Face and Body Highlighter, which offers that glow for those languid summer evenings. I am pleased to have both as I have a summer ahead trying them out.

The special thing about these products is that it is not just about the make-up. It is about a story that you can tell with them. As I tried the highlighter on my hands I could easily imagine a sunset dinner with a glorious sea view, wearing a breezy maxi dress and rose gold jewellery, and to complete the look some highlighter on my cheekbones and décolletage. Or what about one of those days where it is too hot to put on any make-up, but you can still look put-together thanks to the Intense Kajal eyeliner? Add to that Pupa’s new balmy oil nourishing lip balm. If you want to add some more colour, then maybe try their made-to-last waterproof eyeshadow – I know I would want to try that too! In between the event and now, I have tried out the highlighter and the lip balm, so here are my reactions. I still have to try out the kajal which I got together with the highlighter, but I will do a mini-review of that on my social media, so keep an eye out!

First Impressions of the highlighter: On first application, I noticed that it was slightly on the glittery side, which I tend to avoid. The second time round I decided to blend it into my foundation and blusher, which helped achieve the desired glowing effect. So if you get this, make sure to apply it with a smaller brush and move it around, because it can be a bit shiny if left unblended. Other than that, I like its consistency, its feel and its lightweight quality.

First Impressions of the Nourishing Lip Balm: The latter I was so pleased to find in the bag (together with other items), which they generously gave us at the end of the event. As I tried it, I noticed its soothing effect, which is attributed to raspberry seed oil. Initially I was sceptical about the colour, as it is a striking pink. I was pleasantly surprised as it is quasi-colourless on application and it tastes almost like raspberry. Having applied it a couple of times now, I can say it has helped by dry chapped lips. 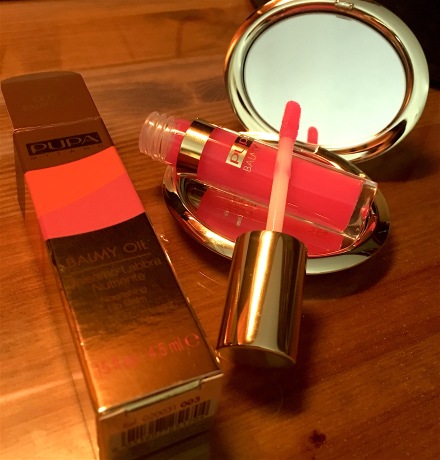 If you want more information on Pupa’s collection, check out their website here.

Mini #throwback to a fab weekend in Gozo. First time with the motorcycle 🏍 an adventure, trying new things and discovering new places. #beadventurous #bebold #outofmycomfortzone #letsgozo #imhobbok #weekendbreak
First week of February went by well and fast, didn't it? Time flies when you're occupied and focused on meaningful, purposeful activities. . . . From my work with students to gym sessions, from reading and home duties to catching up with friends and other recreational pursuits, it is all about achieving and maintaining a healthy work-life #balance #simplify #sayyestowhatmatters #maketimeforwhatcounts Happy long weekend!! . . . p.s. Thought of accompanying this end-of-week reflections with a dose of colour courtesy of the vibrant, picturesque street art dotting most of the houses in the old part of Funchal, Madeira's capital #travel #memories #latesttrip 🏛🌆✈
The wind in your hair 🌬, the openness of the air 🏞, the salty taste of the sea 🌊 blue and green more than the eye can see 🌈 . . . #motorcylediaries #motorcyclerides #hondacb650r #biltwellhelmet
First month done and dusted! 👊🏻💨 Kicked it off in style with fireworks and all in the Azores 🎇🎉, followed by 4 full weeks of work and commitment to an important role I have had in preparing future educators 👩🏻‍🎓 . . . On top of that, I promised myself that from the very beginning of this new decade, I would be focusing on achieving a more sustainable balance between work & life ⚖ So far, I am happy to say that I have managed to do so more than expected. . . . This is partly because I discovered an exciting outdoor leisure activity 🏍 ... And that has made all the difference 🏞
One of my childhood inspiration s for adventure and travel was Tintin - so chuffed to have found some tokens to rekindle that nostalgia, but mostly to plan ahead. ✈ . . . The calendar is ideal for the latter. 📆📝 . . . I have had the notebook since my first trip to Brussels and am finally using it as a book log to keep a record & some thoughts on my reading. 📖✒
Rediscovering Malta's gems #motorcylediaries #motorcylerides #selmunpalace #lovemalta #maltatourism #hondacb650r